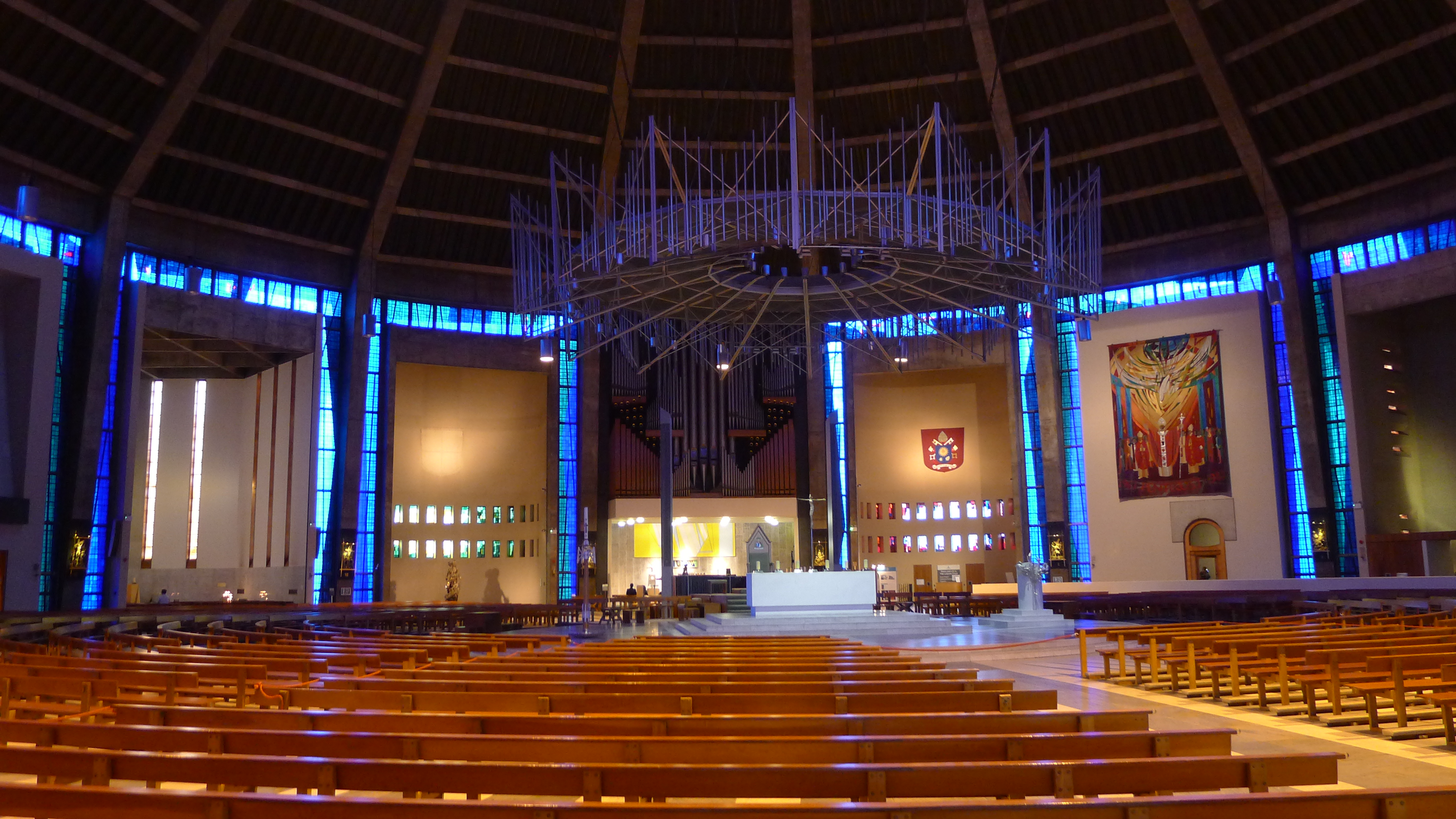 When I started writing these “A little trip to…” posts, the points was really to get me out and about in Britain more and while there has been some success in this quest, I feel deep shame that the North really lacks any love and care from me. Thanks to Virgin trains doing a super sale (seriously £20 return from London to Liverpool is brilliant), myself and Rokos (check his cafe out here!) headed to the home of The Beatles, centre of slavery, left-wing haven and birthplace of the true musical icons Atomic Kitten. A two and a bit hour journey of low-level sewage smells from the train loos later and we arrive at the grand but curiously empty Liverpool Lime Street station.

Rokos took me to News from Nowhere bookshop, which is a bit like paradise for me; a not-for-profit worker’s co-operative with a great selection of books about evil things like America, Capitalism and Sugar. I  bought a Palestinian film I’d been interested in seeing, 5 Broken Cameras, which, by the way, is brilliant film. Making it even more perfect? William Morris, the main man of my ‘hood Walthamstow, a keen socialist to boot, wrote the book the shop took its name from! After this, we had a coffee – I am in coffee training and had my second ever flat white – at Bold Street coffee. It’s independent, people have big hair and laptops, it’s all very now. 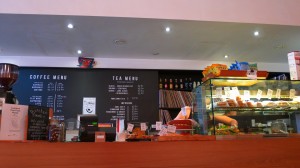 As I was out with Rokos, we absolutely had to have a burger for lunch so headed to Almost Famous, which is one of those places with burgers made entirely out of grease and slimey stuff. I had something called the “You will die once your body tries to digest this much goo in one go” and very nice it was too. Wobbling out, we walked through the city to Albert Dock and the Slavery Museum. Inside, on the floors dedicated to the boaty history of Liverpool, we saw the most 1980’s sign ever… 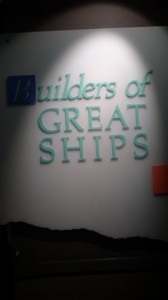 Nearby were loads of models of old boats and not one of them had a slide for kids to go down. It is a shock that the Cunard line didn’t realise that boats are boring, especially for the poor who were trapped in the dank bsements. Even for the rich, eating Swans made of diamonds would pall after a while.

The Slavery Museum, however, really did offer food for thought and was put together with people like me in mind. It was full of colours, lights, shapes and some exhibits that really allow you to understand the horrors of slavery. The museum challenges you to look around at the impressive buildings in Liverpool and consider how many of them were built on the back of the millions that suffered in faraway placesso we could be filthy rich. A particularly vile exhibit was blown up to highlight how a family that owned many slaves wrote “Merry Xmas” on their bare chests while the family lounged around in the foreground. That the museum manages to make you confront this evil and at the same time offer a coda of hope shows the deep thinking that went into it all. My thoughts on the museum don’t do it justice, so I suggest you read this insightful article on it from the Guardian. 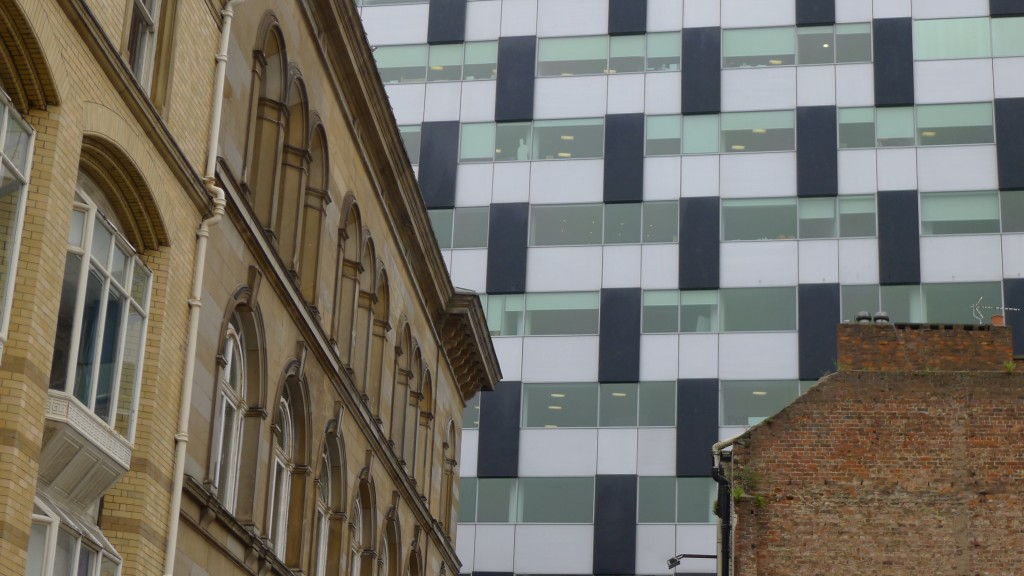 The Three Graces is a suitable highlight of Liverpool – a real display of immense wealth and confidence the city had but in traditional British style, someone at the planning committee continuously thought that to really make the area stand out, it would be appropriate to plonk some truly hideous buildings all around it. Good lord, what are these people thinking? British cities always have this going on but for some reason, the planners and architects had a jamboree here. In my photo below you see to your left the truly vomit-inducing car park/mountain, obligatory new block of flats designed by someone who hates humans and the one saviour, Atlantic Tower which shows a certain level of ability in making the building look like a boat. 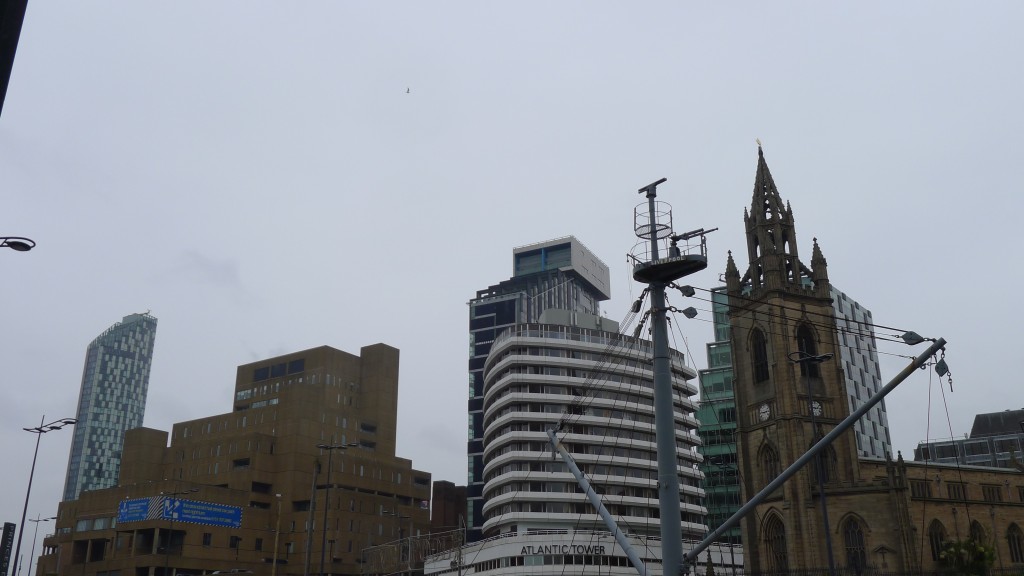 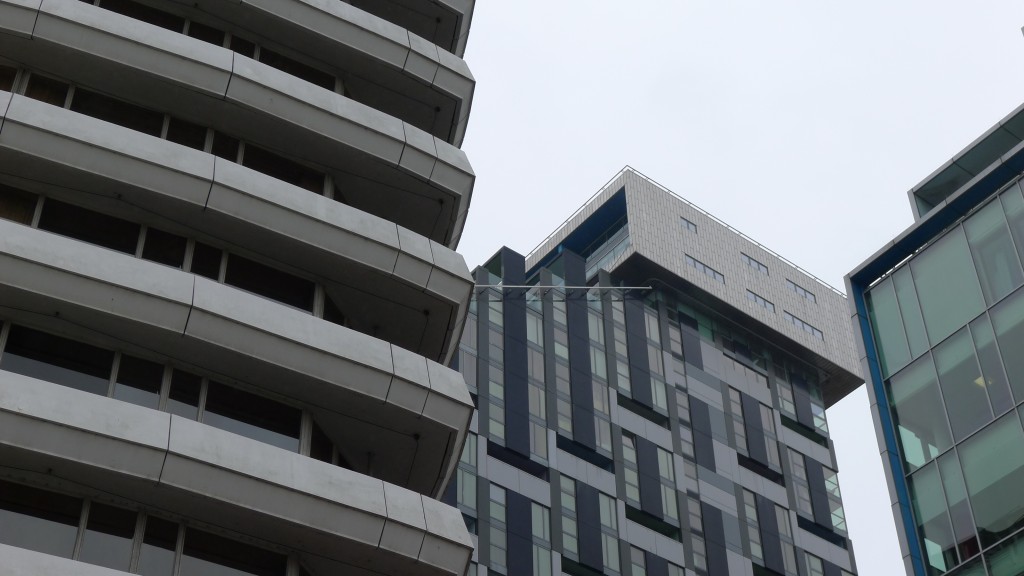 Good building and awful one behind

Liverpool is a city of great architectural contrasts. The city retains a lot of its architectural charm, is able to boast more Georgian buildings than Bath, has 2,500 listed buildings and while it seems many buildings are in a state of disrepair, it was visible that new restaurants and shops opening up are making good use of the beautiful spaces in the city.

We passed through an empty arcade that oozed grace and elegance – the India Buildings. Originally the headquarters of the Blue Funnel line, yet another throwback  to when the city could boast of being in the A-League, the building today appeared to be mostly empty. The
little sweet shop was barren, as was the barbers. It didn’t quite feel that you could walk through it, but surprisingly you could. 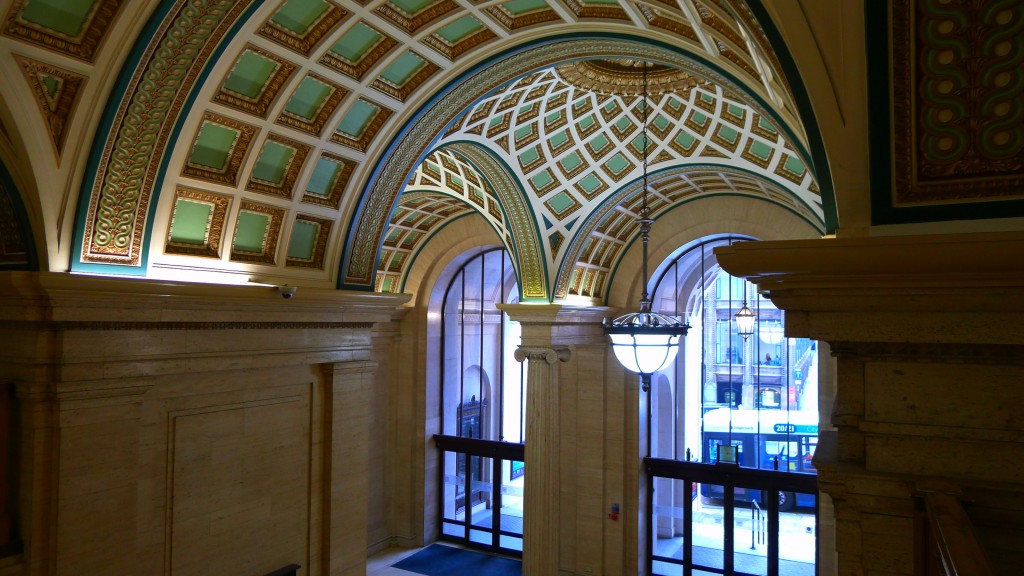 Liverpool is rightly famed for its sensational Metropolitan Cathedral and on the way there we walked past the bombed-out church which was gutted by a fire caused by an incendary device on 6th May 1941. Once a beautiful church, St Luke’s is now a nearly-perfect shell of its former self. As sad as it is to see the destruction, it is wonderful to see it remain a part of the city’s fabric and to see a group looking after it. 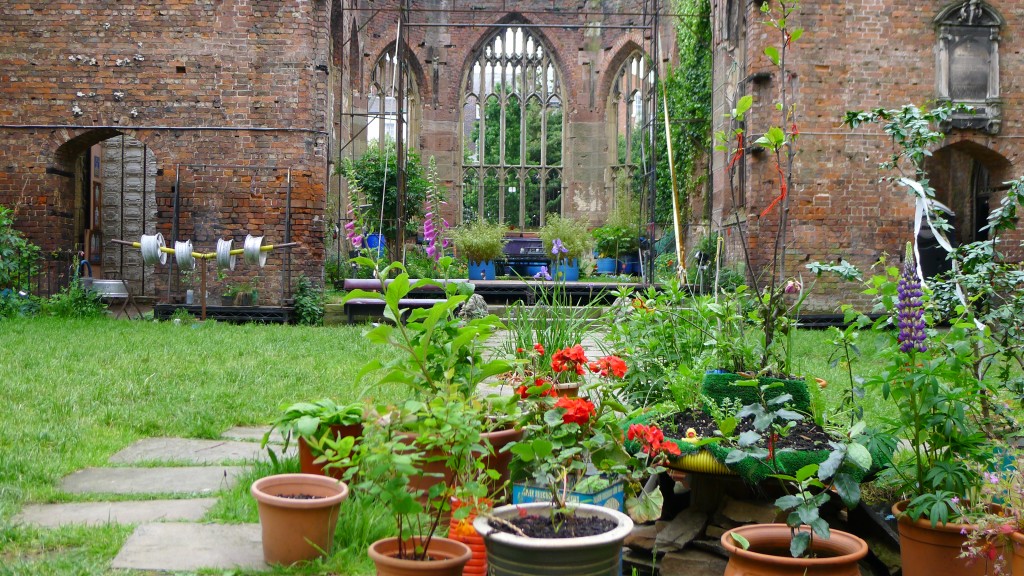 Onwards to the Metropolitan Cathedral and despite just getting a brief look around before mass started, I was bowled over by the stunning stained glass windows in the colours of the Trinity. If I had the chance, I would have spent an age admiring the warm colours and often sparse walls of the building. Quite simply, it is spell-binding. 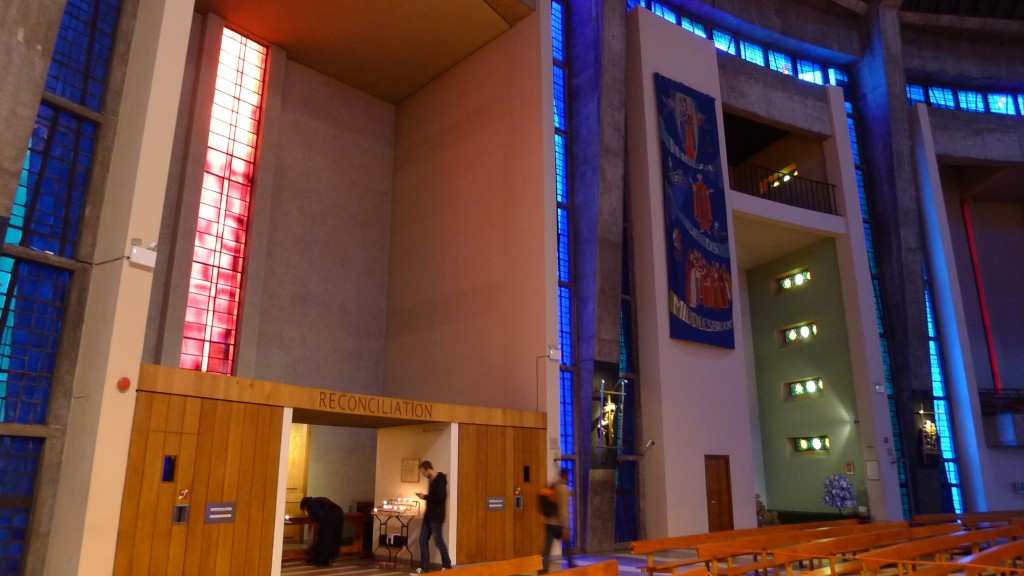 Another landmark of Liverpool is The Philharmonic pub, in itself a reason to go back to the city. The exterior boasts a textbook of styles, from windows in many shapes, balconies, parapets, sculptures and an art nouveau entrance gate. Inside are beautiful copper panels, rooms themed around musicians, elaborate ceilings and possibly the greatest gent’s loo in the land. In fact, so great is this loo that I had to stay in a cubicle listening to a gaggle of lady pensioners marvelling at the marble, making cock jokes. No way was I subjecting myself to the mirth of pensioners. As one of the ladies said, it wasn’t the first time she’d seen a large pink item in a toilet. Ahem. 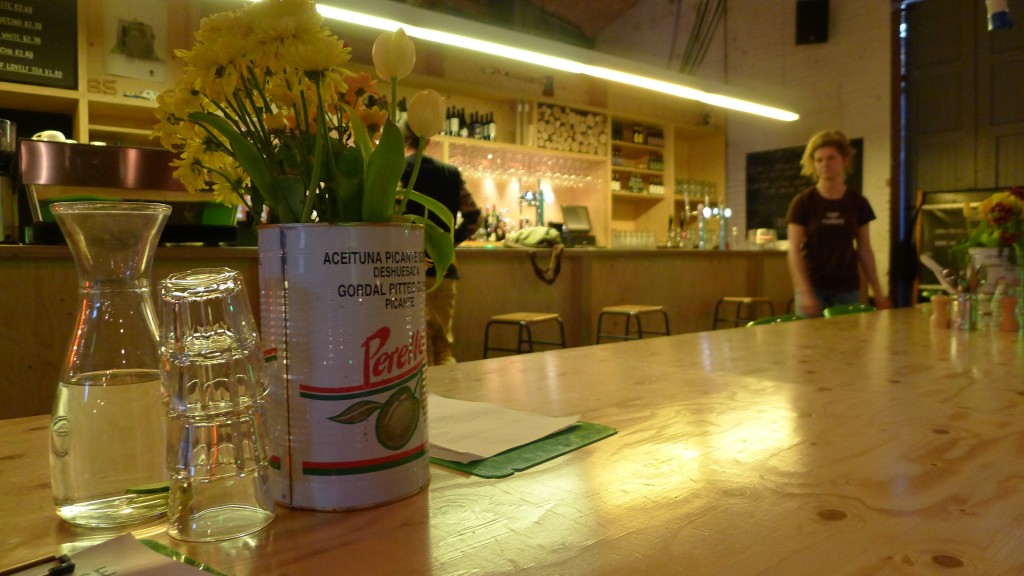 Before leaving Liverpool, we ate at rapid speed at Camp and Furnace. It is said to be the “second coolest restuarant interior in the UK” and is suitably mdf-d up to play the part of cool new venue. It’s in the middle of an industrial area, features a restaurant, bar and gallery space and produces pretty knock-out food at prices that would make a London cynic weep with envy. I couldn’t think of a better way to end a day in a city that is moving forward in its own direction. Liverpool really seemed like a city that knows itself and is proud. Yes, there’s the inevitable signs of a city that is not quite working at full potential – glorious Victorian buildings in the centre of town with trees growing out of top floor windows, empty shop fronts and so on…but examples abound of an independent spirit taking root. Needless to say, I’m counting down the days until I can go again.