I’d love to call myself an intrepid traveller but I’m sure I’ve a long way to go; I’ve never been on a package holiday, have taken holidays in Georgia, travelled to northern Sweden to witness the midnight sun and went from house to house in Cuba. However, I know people who are off to Burma and envy those who take trips to Iraq and Afghanistan – guided tours as they are, that still appeals to me. 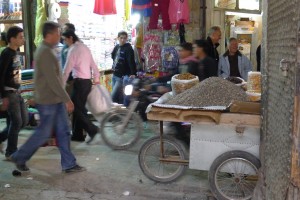 My trip to Jordan and Syria in April 2011 was as about as intrepid as I’ve ever been, and viewing what is now happening in the beautiful city of Aleppo is truly heartbreaking. Due to an escalation of violence in Syria, my friend and I cut two days out of our Syrian portion of the trip, from 5 days to 3 and had to regrettably bypass Damascus and focus on Aleppo and the surrounds.

We were taking pictures of a mosque, when a man invited us in to look around which we did with a level of excitement as in Jordan we only got to see the inside of the main mosque in Amman. He told us about what they do, which included acting as a school house and I surprised myself by pointing out a picture and realising it was of the 5 pillars of Islam. Quite how I even knew that…perhaps I was more researched than I knew? 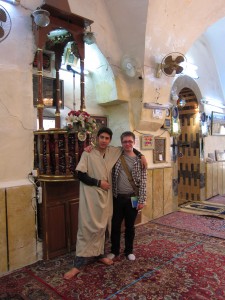 As we left the mosque, we came out and a tour guide was showing people the mosque and telling stories. Everyone seemed in high spirits and it reminded me that on the 4th month of the conflict, tourists still wanted to see Aleppo. I like to think they didn’t get to go inside the mosque and we witnessed a special moment. After this, the souk beckoned and it was a wonderful mix of heady spices, shops piled high with Aleppo soap, fabric merchants…just about anything you want. I loved it! It wasn’t particularly pushy and twice we found owners telling us that their shop was in the Lonely Planet! 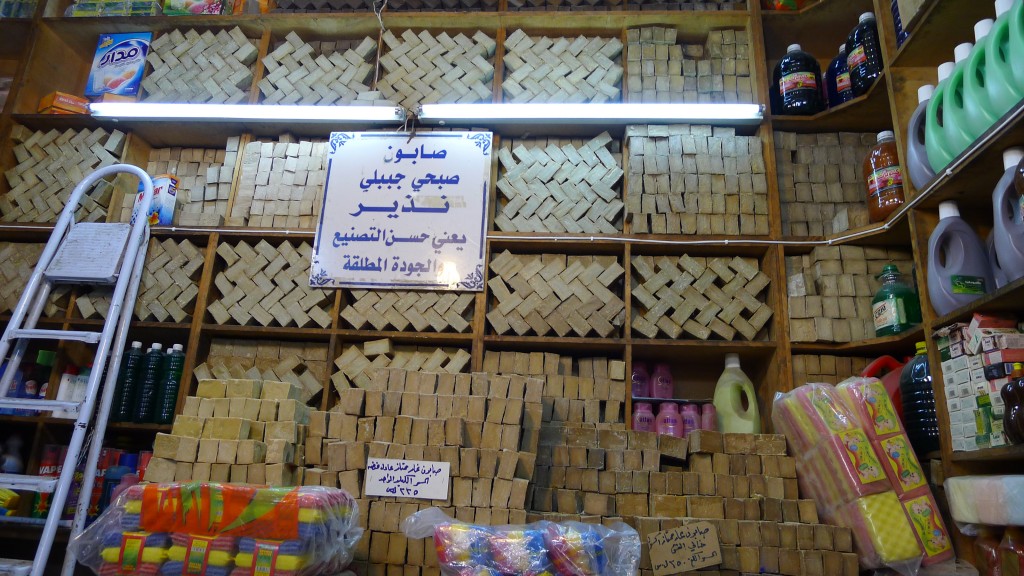 The area around the souk proved a treasure trove for photography and I was utterly in love, all the time slightly worried about where I was but also savouring every second of it and taking in the city. We found a quiet courtyard which was packed full of beautiful antique chairs, a few abandoned sewing machines dotted around the fountain and elegant architecture giving a reminder of how culturally rich Syria and Aleppo is. On leaving, a man was selling spiced flatbreads, which were sensational…still warm and perfectly fresh. There was no way we could eat just one so we ran back to find him for a second and marvelled at our first proper Aleppo food experience, our expectations already high.

Some more exploring led us to the square around the breathtaking citadel, a perfect place to sit for a drink of lemon and mint, which quenches the thirst llike nothing else. Around this point I noticed a distinct lack of billboards and adverts that weren’t Assad’s face, and I struggle to recall if I even had a can of coke out there.

In the evening we went to the Baron Hotel, which we find out is famous for being where Agatha Christie wrote the first part of Murder on the Orient Express in room 203 and also where Assad’s father, also a man who brutally quashed dissent through murder, stayed. The hotel owner whispered into my friend’s ear “tip the man!” when we were led off to see the rooms. The owner was full of character and was willing to show us the sights around Aleppo but we’d already found our driver by the osmosis that was so common in Syria: we look lost, someone asks if we need help, it turns out he is a tour guide so we book him up there and then. Such an easy way to do business! The Baron Hotel was fantastic; it was full of remnants of an age where train travel from London to Baghdad was possible, making me long for that age where I could take such wonderful trips! We had a great few hours there, looking around, taking photos and drinking Efes in the bar. We ate at Sissi House in the evening, apparently a favourite of the ubiquitous Assad, but thankfully he wasn’t eating there. While the food was good, the service was a bit on the “sigh, come on…eat here if you must” end of the scale and the Syrian wine was remarkably putrid. I know, I know, Lebanese wine is wonderful, but when in Rome/Aleppo. The soujouk in Aleppo is different to elsewhere, wrapped in a sort of pastry which adds something to it, and it looked like a really tasty snail. 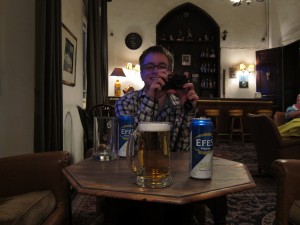 Only on our second day, when we left the city because of the planned protests, did we start to get a sense of the crisis sweeping the country. The day was being touted as “The Great Friday” and without access to media outside the hotel, we had little knowledge of what was happening. As it turned out, over 100 people died on 22nd April; it was the bloodiest day yet and at this point the UK Government had advised against all travel to Syria, which was both a little scary and exhilarating. Alongside this, almost all foreign media had been expelled. We entrusted ourselves in the capable hands of the driver we met the previous day and he drove at the speed of light down empty motorways towards Hama, where we had been due to stay. In 1982, a massacre had taken place there and now entry to the town was impossible due to a police/Government presence of guns so we sped off to Krak Des Chevaliers. 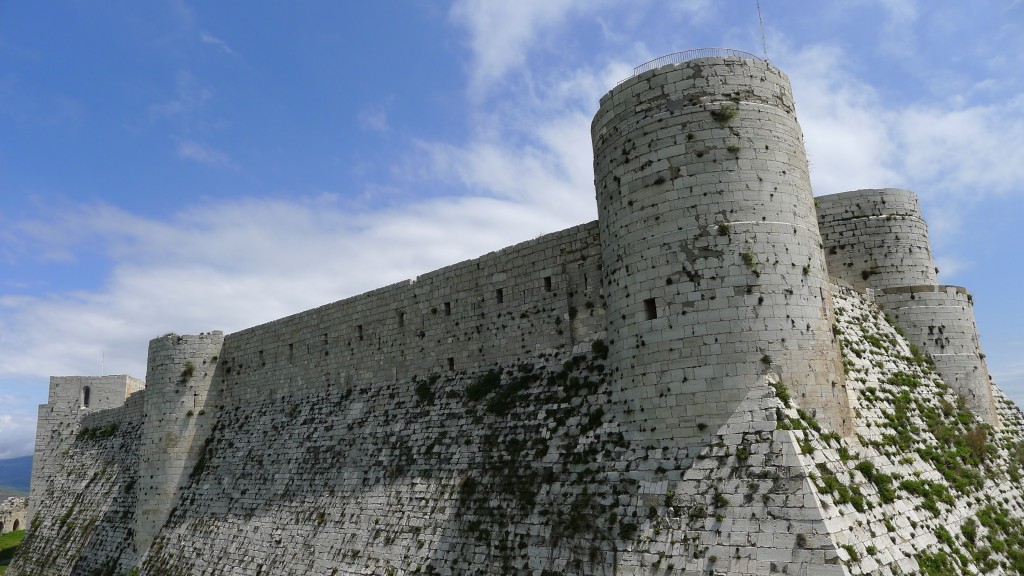 Krak is is a beautifully preserved crusader castle which is seen as one of the most important of its kind in the world. Recently, like Aleppo Citadel, it was shelled, apparently because rebels were hiding out in there. However, the recriminations run both ways and the blame for shelling the Citadel have been levelled as the FSA and the regime. The castle was duly spectacular and my guide seemed to take a shine to me. As he showed me various amazing things, he always seemed to end up touching my arm or pointing my arm in a direction. It was particularly weird and when we went down a dark passage I suspected his plan was to hump against me but he never did. Instead, I got over it and listened intently to his stories and deep knowledge of the castle. His refrain of “I am not a tour guide, I just love the castle” inevitably got him a good tip and I felt blessed to see such a beautiful castle. 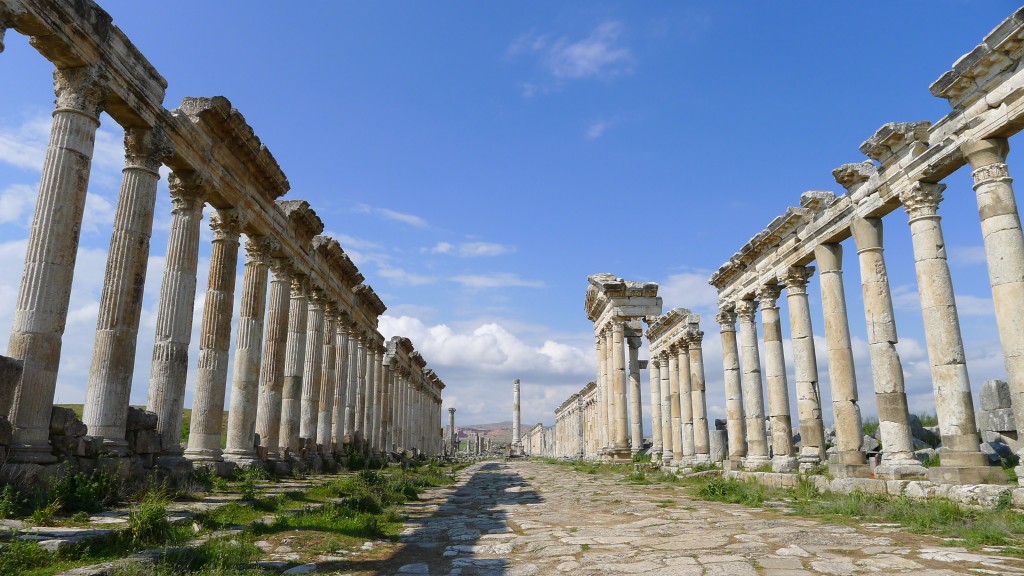 After this, we went onto another jewel of Syria, Apamea. After Jordan’s multitude of ancient remains, Apamea wasn’t as spectacular as some might find it. After all, once you’ve been to Petra and Jerash, much pales into insignificance. Apamea was still beautiful and almost entirely empty.

In the distance, the Friday protests started becoming apparent as through the silence came insistent chanting; and at that very moment I decided Apamea needed more investigation and that leaving the ancient ruins would be a terrible thing to do. I’m not a wimp, I just really love old stuff! When even I realised that standing and staring at the same ruins while our driver was staring at us was becoming a bit ridiculous, we headed off to the dead cities. En route we came across a protest of a few hundred people and I recall the moment with perfect, bone-chilling clarity. Whereas Rokos and I had joked that we could mutter “awkwarrrrd” when in a protest, the reality was that I tried to make myself look invisible in the back of the car and I tried really hard not to look panicked. I wasn’t worried of the people nearly as much as I was worried about the Government. After a few moments I noticed the crowd were walking past us, and many were carrying olive branches. These weren’t people to be afraid of at all, but it was obviously building momentum. As we sped away from the protest, every car was going in the opposite direction, presumably to join in. Squeaky-bum time. 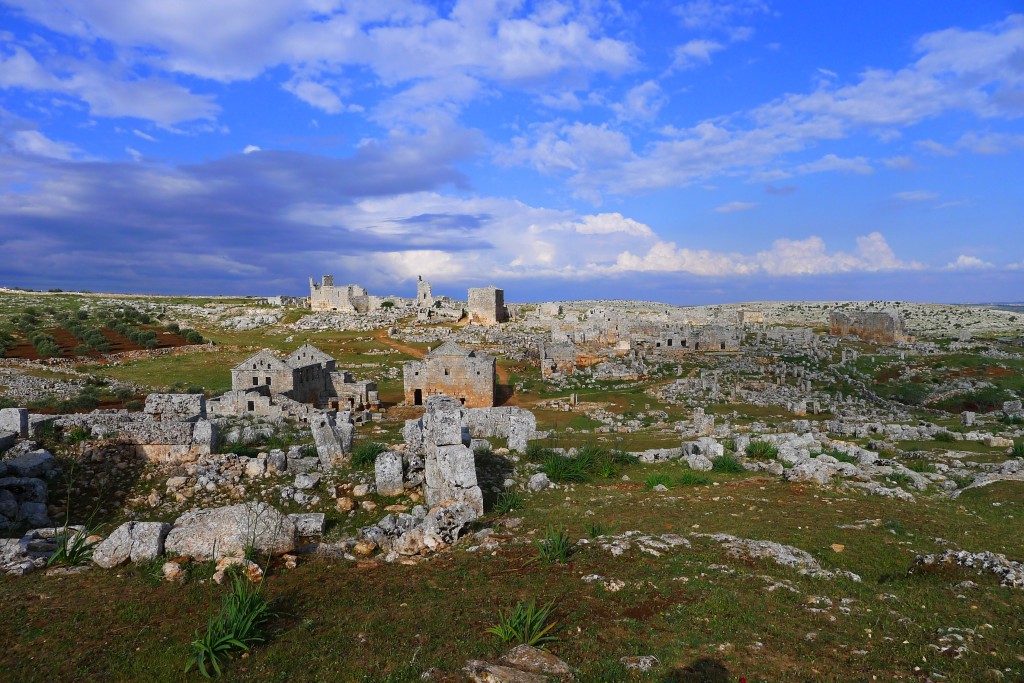 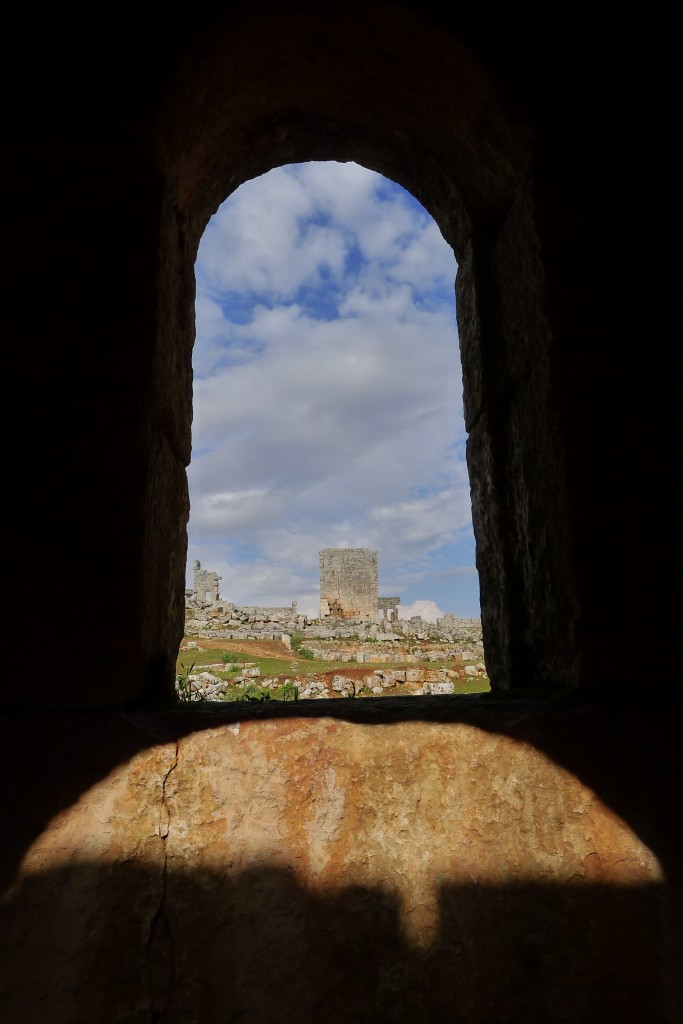 The Dead Cities though, another “wow” moment as you get close up to hundreds of abandoned settlements about 40 miles north of Aleppo. With almost nobody about, a pleasant absence of chanting and spectacular light, this was a really beautiful moment for me. The soil was the richest ochre and all the colours seem exaggerated, including a sky that seemed to extend forever in all directions. Our driver took us to a few of the villages, each had ruins in various states of repair but all offering great photo opportunities. As we drove back to Aleppo and passed villages and towns, I kept expecting to see more trouble, always aware that something could happen but everything was peaceful.

Another example of the brilliant character of the Syrians we met came when looking for a restaurant. I may be a bit fuzzy on how we ended up with 5 men surrounding us trying to help but in all probability we just looked puzzled. A man came to see if we were ok, swiftly followed by another and one popped by for a few moments. We are led into a shop where a woman didn’t know of the restaurant but when we mention a restuarant it was near, suddenly everyone is able to point us there. The whole thing took place on the street, in two shops and the helpfulness of 6 people. Our restaurant was excellent, by the way, and we were given free pudding. Result! I was intrigued by the American Diner look to this restaurant…of course I didn’t go when so much good Arabic food was to be had! 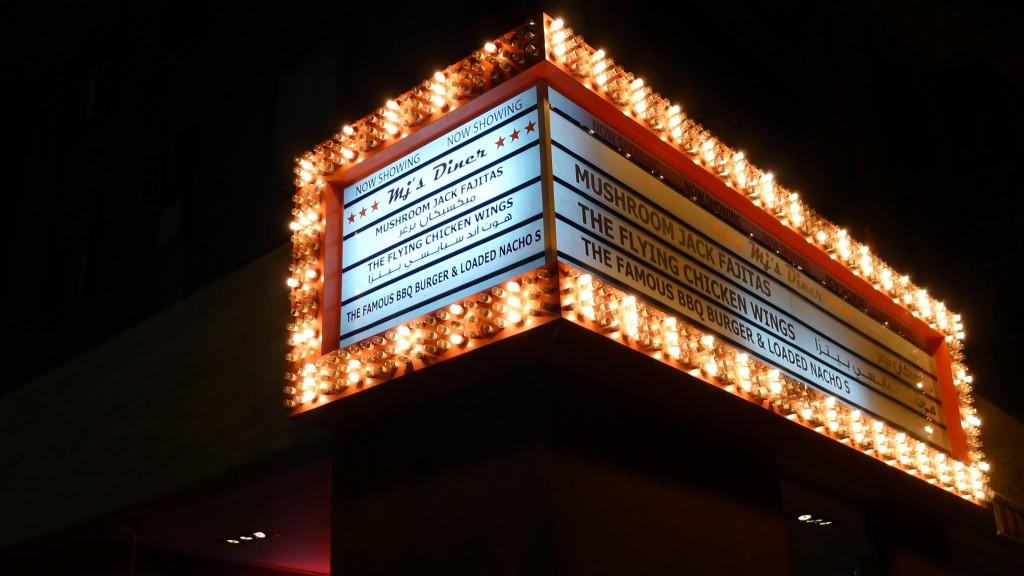 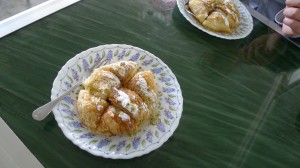 Our last day was all about getting to know the citadel better, heading back to the souk and whatever else took our fancy. In a bakery near the market, we had some fantastic pastries and asked for a coffee and tea to go with them. The owner neglected to say he didn’t serve drinks, but he despatched someone to get us drinks from the market. Amazing!

When vans reverse in the UK, they often make a squall that is as annoying as it is cross, but here’s a video of a van reversing to a cute tune. Lovely

The video cannot be shown at the moment. Please try again later.

We ended our time in Aleppo wandering through the Christian part of the city, seeking out ice-cream and savouring the last few moments of an exceptional few days; at times I forgot I was in a country going through turmoil and I fell head over heels in lov with the Syrian people. As I left Aleppo airport, now the scene of shooting and fighting, I found it hard to equate the news with what I’d seen. I wanted this conflict, I’ve always wanted it, to stop but now things are so different I can’t imagine Aleppo will ever be the same. I’m both thankful and desperately sad about this and my trip will always be a special memory for me. I hope when I was there I was able to help traders who were seeing a drop in income, and I hope people were happy to still see tourists come and love their city.

If Syria doesn’t succomb to a drawn out, Beirut-style disaster, and if it doesn’t turn its back on religious tolerance I’ll be there again as soon as I can. I just hope that day is soon, and free of the people on both sides of the conflict who think senseless torture and killing is the answer to the problem.