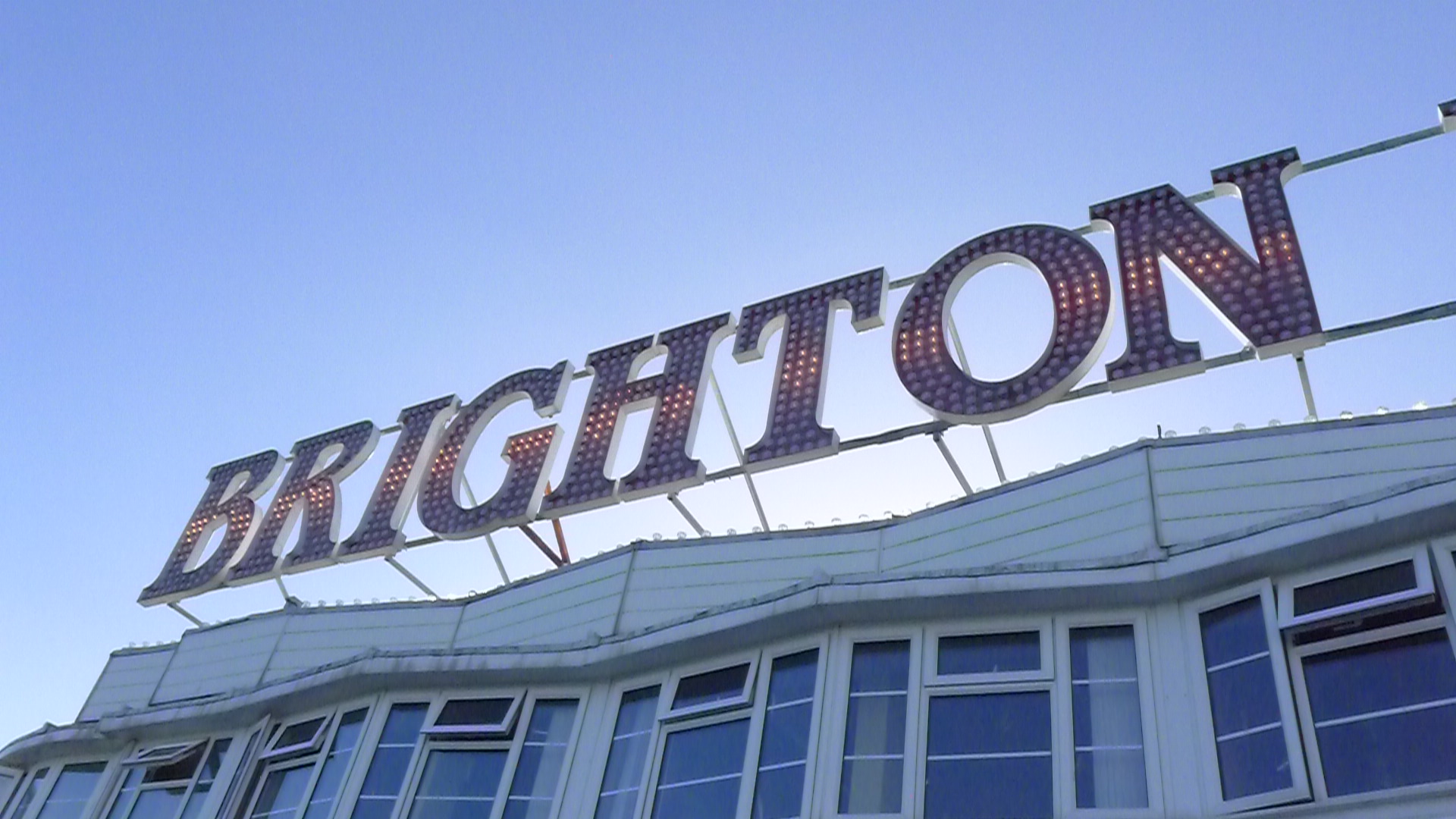 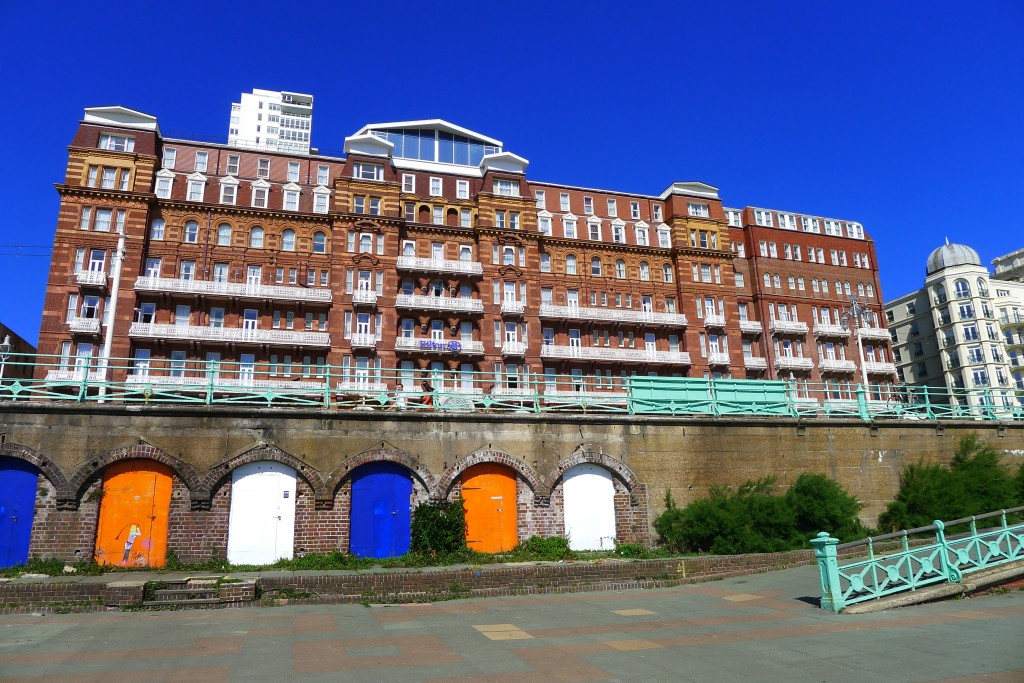 As you walk down Brighton’s pier, you enter a realm that time forgot – or pretended it forgot but actually loves ‘cos it’s secretly ace – The Dome! Inside this dome are games for the stingy (me) and the nostalgic. Alongside the Air Hockey which I lost 7-0 to the 2p and 10p slots, I found myself loving the sheer memories these arcades brought back to me; only, as a kid we never went anywhere like Brighton. I do remember being utterly miserable somewhere like Clacton pier as my parents pushed me onto a swing ride of death that seemed to jut out into the grey murky sea on a tremendously foggy day. As a kid, my seaside memories evoke terror and dread. As an adult, my seaside resort memories are a mixture of sadness for the loss of the glory days and an enjoyment of these innocent arcades, scalding cups of tea and constant fearful glances at vengeful Seagulls. 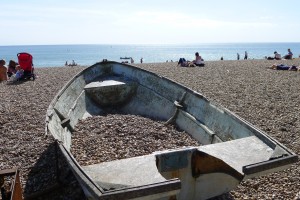 In the Pier’s dome, the 10p slots only took old 10p pieces, as the new ones are too thick. It’s almost a metaphor for Brighton in 2013.  The city might like to think it’s the coolest of the seaside resorts, but it’s still steeped in the past and it’s all the better for it. In fact, as soon as we arrived at the train station and bagged our M&S mojitos – hello you sweet, strong beauty – there was a city of two tales on display, from the football fans and ever-ready coppers to the dual protest outside a shop about Israeli’s making soda stream on Palestinian territory, accompanied by pro-Israeli’s and their own leaflets. Whatever is going on with soda-stream, I don’t think anyone in Britain is going to be cracking open the bottle of 99% fizz and 1% disappointment anytime soon.

As we headed towards the beach we went for Fish and Chips at Bankers, which did a cracking cod and chips for a fiver. The chips were moreish and the fish was a delight…but why should this be anything out of the ordinary? Sadly, Brighton seems to have a fair few chippies that rely on their location rather than their ability to cook. Bankers might be a little out of the way of the town centre, but it’s worth the extra 10 minutes walk. 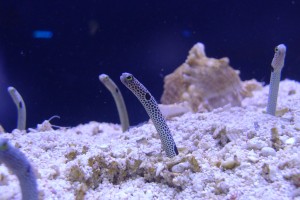 As we headed towards the beach, it seemed remarkably quiet for a glorious late summer’s day, but a look on the map shows we were just outside the main beach area, around the lawns near the Kingsway, itself just a stroll away from the first of the many restaurants along the beach front leading past the hulk of the old pier. As you head towards the remaining pier, everything gets busier with throngs outside the usual chain bars and clubs pumping out questionable music even in the afternoon. Happily it’s not all hen do’s and staggering stags; the Artists Quarter offers arches full of local art and the quality I saw as I passed seemed high though I was rushing to see watery creatures at the Sealife Centre. 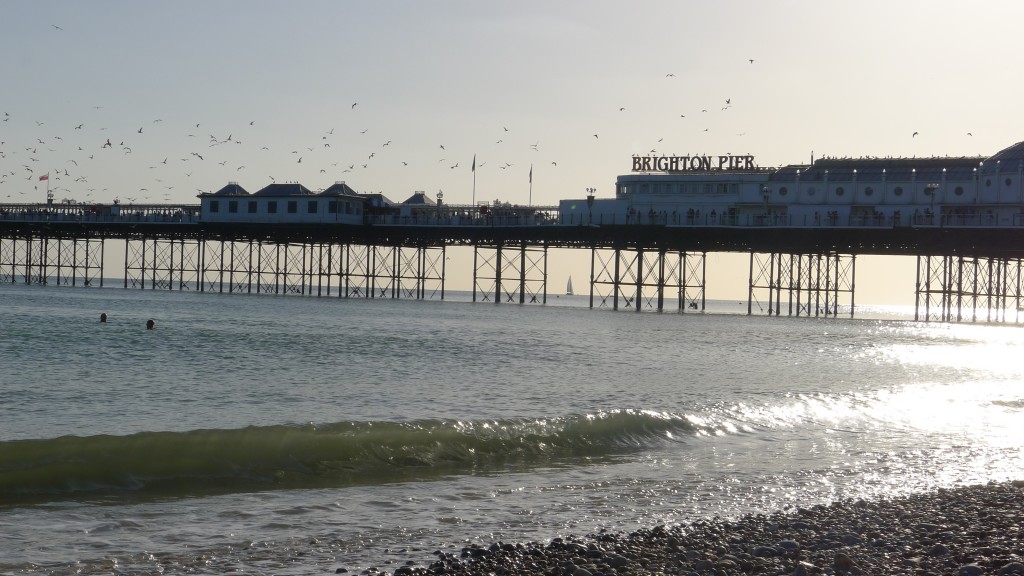 I don’t make a habit of visiting aquariums, but as teachers had a free entry in August, I was all up for it and the visit reminded me of how bizarre nature is. One fishy thing was just a block of muscle that presumably spends its life opening its mouth and hoping for some food to just appear, there were the cute little worms that pop up from the sand to stare and then the starfish. They may look cute but they eat their food by popping one of their many legs into the shell of their prey, prying it open and inserting their stomach into the hole in the shell. Then they liquidate the poor creature and suck it all up. I used to have a colleague who ate like this and it’s not a pretty sight.

At the Sealife centre I saw lots of Sharks not biting the heads off anything and it just reminded me that the whole world is a fraud. I wanted to see tanks of blood and maybe a giant squid attack. The sharks seemed pretty amiable but the Octopus’ were the coolest thing in the whole aquarium. In a quirky twist, the Sealife people decided to hurl a bunch of kids toys in the Octopus tank, perhaps to remind us how clever they are. That, or a mother really wanted rid of her kid’s toys. 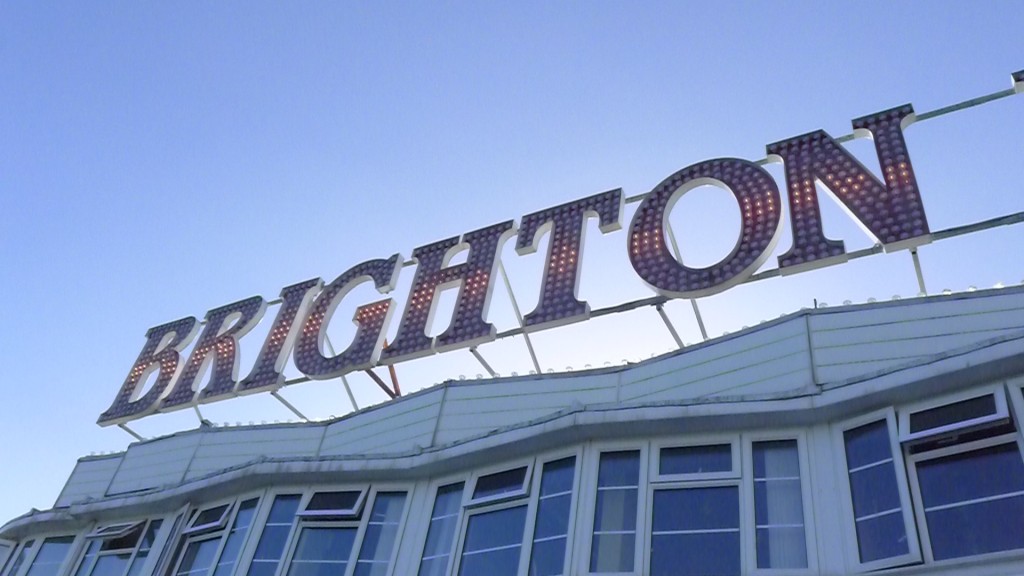 Post-aquarium we headed back to the sea, ran about in the sea until the pebbles hurt too much and retired to a pub in Kemp Town. After falling in love with a Pug and drinking some average wine, we emerged to darkness and into a takeaway Pizza paradise called Pizzaface. We had the Alberto, with Salami and Pancetta and fell into a bliss known only by crack addicts and people who just found an amazing pizza place. It was so damn fine, it requires a trip back to Brighton – no hard thing as Brighton’s charms grow on me every time I visit. It’s maybe not as cool as it thinks, a local quoted Nick Cave’s assertion that it was a culture desert, hen do’s were terrifying all in their wake, but it’s still a great place to visit.