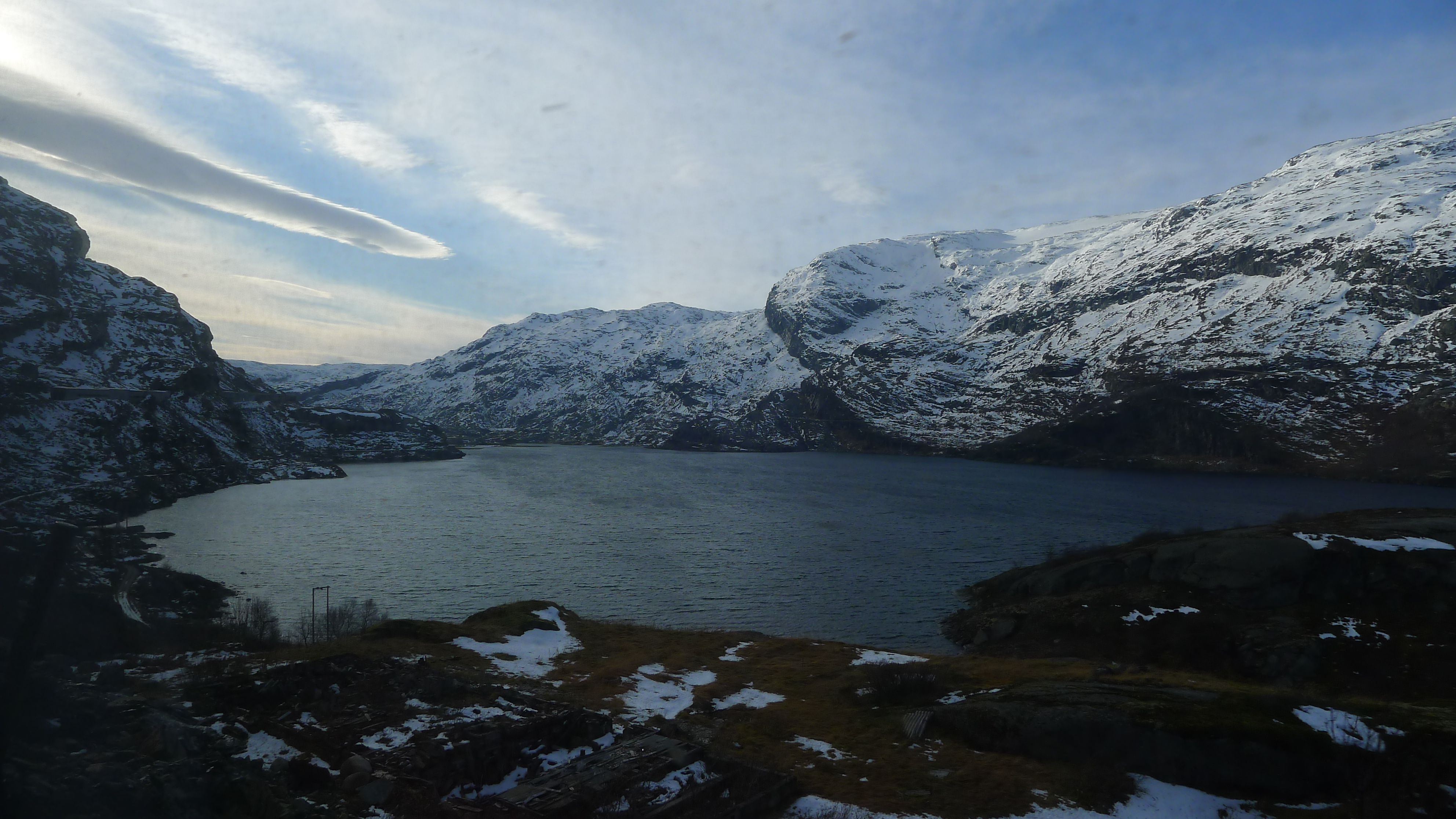 The Bergen line railway will change your life

I felt compelled to write lots about the wonderful Bergen line train journey but really, the whole thing works best in the visual medium so I have scattered this blog post with images from the journey.

We took this train journey as my friend Graham and myself were staying with the delightful Dave Nikel who recently moved to Norway, his diary is here. On our first night in Oslo, we found ourselves invited to a party in this great old pub in Oslo that fulfilled all my Scandinavian dreams of dark wooden beams, wooden tables and weird bar staff who claim only girls drink cider. Granted, the only cider on offer was the reliably girly Kopparberg, nothing like the manly scrumpy I drink in England. Grr, manly! The Norwegians we met told us about the train journey and agreed it was average for the first few hours before becoming beautiful.

The journey is around seven hours and so I decided to sleep for the first 2 hours; when I woke I noticed the landscape had already changed dramatically to one of lakes and big hills…not quite mountains. Even this landscape was undeniably impressive!

The early stages of the train journey

A while later, and the landscape became more and more remote and ever more stunning, we started to discuss the use of the words “epic” and “awesome” because clearly these words are overused. When confronted with the epic and awesome beauty of nature at its best, there are few things in the world which can compete.

As the landscape changed, we became more and more excited, jumping from one seat to the next. This is where we found paying for the Comfort Class came in handy; it’s like First Class but still remarkably cheap for Norway. Nobody was in our way as we hopped from seat to seat and basically acted like we’d never been on a train before. For a one-way trip on the Oslo-Bergen railway, you’ll be looking at about £40. This may be the best deal in Europe.

One of the most arresting sights on the journey was a valley filled with mist. At the moment the mist was most apparent, the view cleared up and we could admire it in full.

We were able to track the temperature and the height above sea level on the train and over time, we noticed we were gaining altitude without ever being aware of it; the temperature outside was hovering close to zero and at every stop, we rushed out to take photos and just brathe in the air which was beautifully fresh. As we reached 600-800m above sea level we started to see the beginnings of snow in the distance and so we recommenced being as excited as puppies.

Little did we know as we spoke of how this was the most beautiful thing ever that in fact, we were seeing the pre-amble to ascending Europe’s highest mountain plateau where the beauty was cranked up to 11. Here, the mountains were dusted with snow, the lakes were half-frozen and it was hard work getting back on the train, such was the desire to just explore the area, move into a wooden hut with a grass roof and marry a woman called Helga.

After we reached the peak, 1,222 metres above sea level at Finse, we could feel ourselves heading downwards, and the snow started to dissipate. It was a really surreal train journey, going from 10c in Oslo, to -3 in Finse, to 8c in Bergen, seeing the weather change so dramatically.The station at Myrdal, 880m above sea level, is the stop for the Flåm railway which is another trip I will have to do. It is Europe’s steepest railway line and looks every bit as spectacular as the Bergen line.

This journey is wonderful for anyone who is in Oslo and who fancies a day out that will live with you for years to come. For us three, the trip was just for the railway, we weren’t expecting Bergen to be as charming as it was. For a town that rains 220 days a year, it was utterly delightful and rain free! This was a really superb trip and will go down as equal to the magnificence of my day in Wadi Rum desert in Jordan. I feel incredibly lucky to be able to see these sights.

3 thoughts on “The Bergen line railway will change your life”